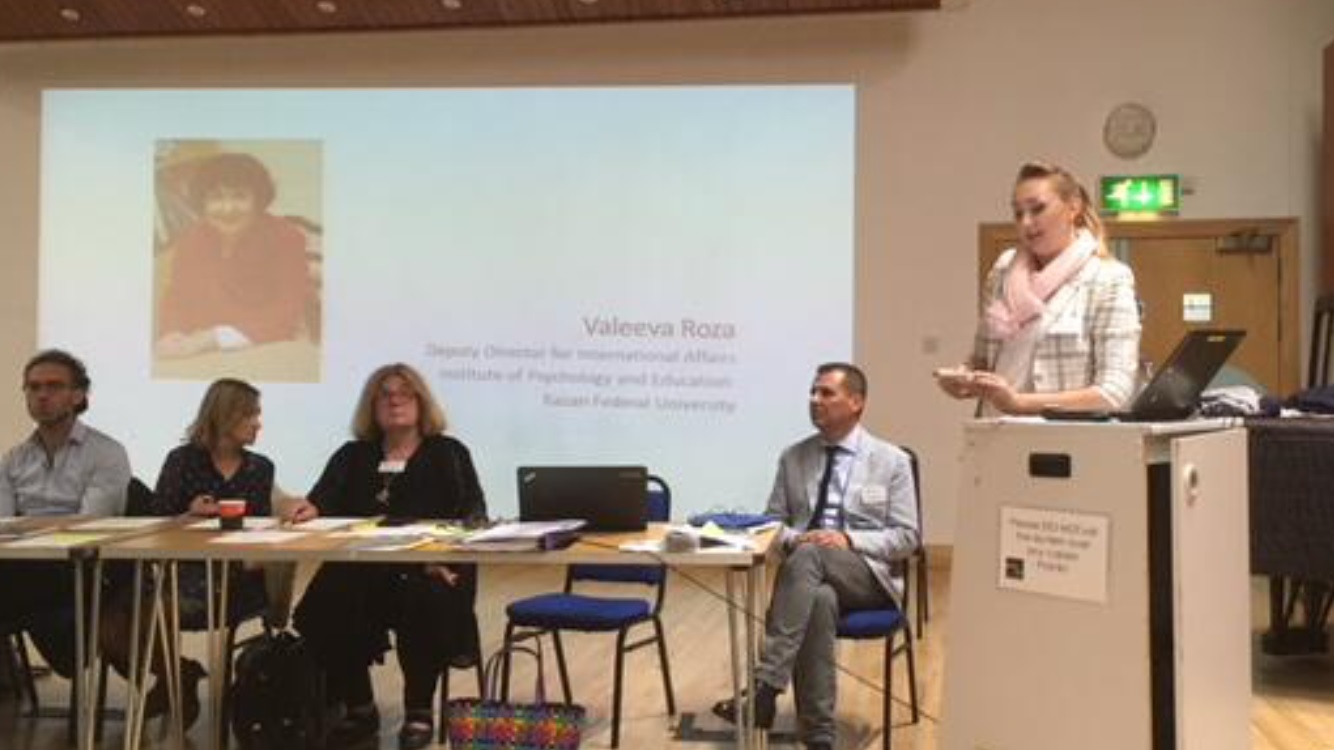 The annual conference Of the Association for Teacher Education in Europe ATEE (Association for Teacher Education in Europe) was held on 14-16 August at the University of bath Spa (UK). Within the framework of the conference, the University researcher took part in a meeting of three working groups, where a sectional report was presented and agreements on joint international studies and publications were obtained. One of the important results of the participation of scientists of Kazan University in the international conference was the inclusion of CFU (the only University in Russia) in the new ATEE network project “Pedagogical education in Central and Eastern Europe: recent events and future challenges”.

The conference was attended by scientists from Poland, Belgium, Portugal, South Africa, Ukraine, Portugal, Romania, Sweden, Switzerland and other countries. Russia was represented by Kazan Federal University in the person of associate Professor of pedagogy of higher school Tatyana Baklashova.

Recall that Kazan University is the only University in Russia, which in December 2017 became a full member of the international non-profit European organization, the purpose of which is to improve the quality of teaching education in Europe and support the professional development of teachers and teachers at all levels.

Section ATEE research group “Professional development of teachers” in order to substantiate the results of the study experience of Kazan Federal University on the relationship of theoretical training with practical training of teachers (content and procedural aspects) Tatiana Baklashova presented the report “Theory and practice in English teacher Education: a case of Kazan federal university master courses,” co-authored with Professor KFU R. Valeyeva.

– The study revealed the challenges and features of modernization of the system of pedagogical education in Russia, justified by the educational potential of the University in relation to training of pedagogical staff, carried out the analysis of competences (level of undergraduate and graduate programs) in teacher education according to the GEF IN the 3++, the model of practical training teachers in the University, implemented in school-University partnerships, the features of the architectonics of the updated program practices implemented in teaching master of IPO KFU in 2016 – said Tatiana Baklashova.

To carry out further comparative studies in the field of pedagogical education with foreign scientists, mutual transfer of positive experience in teacher training, the development of a universal methodological base of pedagogical education representative of Kazan University joined the research group “Global Education”. During the five days of the conference the CFU scientist took part in three working discussions of the research group “Global Education” ATEE.

The trip to the international conference brought new cooperation agreements.

Thus, a joint study on the practical training of teachers and their adaptation to the educational environment of schools will be conducted with scientists from Austria and the UK. Scientific cooperation on migration pedagogy is planned with the international school of migrants (Italy).

– Until the end of 2020, according to the results of joint research we have planned to publish two chapters in monographs ATEE (Article: “International Perspectives on Professional Standards for Teaching” (International Outlook of the professional standards of teachers) in co-authorship Rose Valeyeva, M. McMahon and M. Flores), one at the publishing house Routledge and two 2 articles in Scopus (Article Baklashova “Practical training of the teacher: international experience of school-University partnership” in the journal European Proceedings of Social and Behavioral Sciences). I think this number of articles is a recognition in the international space depth and importance conducted by scientists of University studies, – concluded the Professor of Kazan Federal University.

For reference
The Association for teacher education in Europe (ATEE) is a non – profit European organization founded in 1975 in Brussels. The number of individual and institutional members of the Association is more than 250. The Association covers Europe, USA, Australia, Israel, Africa.
Kazan Federal University is the only University representing Russia in ATEE.
The Association for teacher education in Europe (ATEE) achieves its goal through an active dialogue and international exchange of research and practical results in primary and full-time teacher training. ATEE participants are representatives not only of European countries, but also of many countries outside Europe. Every year, the Association holds several key conferences with the participation of prominent world scientists and cooperates with several international journals in which articles are published following the conferences.
Conference proceedings indexed in database Conference Proceedings Citation Index (CPCI), included in Web of Science database maintained by Thomson Reuters and SCOPUS.
Annual conference of ATEE publishes articles in the journal the European Journal of Teacher Education (EJTE) publisher Routledge, part of the Taylor & Francis Group, SCOPUS, Q1.
On the ATEE website you can find links to many European conferences with publication in the SCOPUS database.