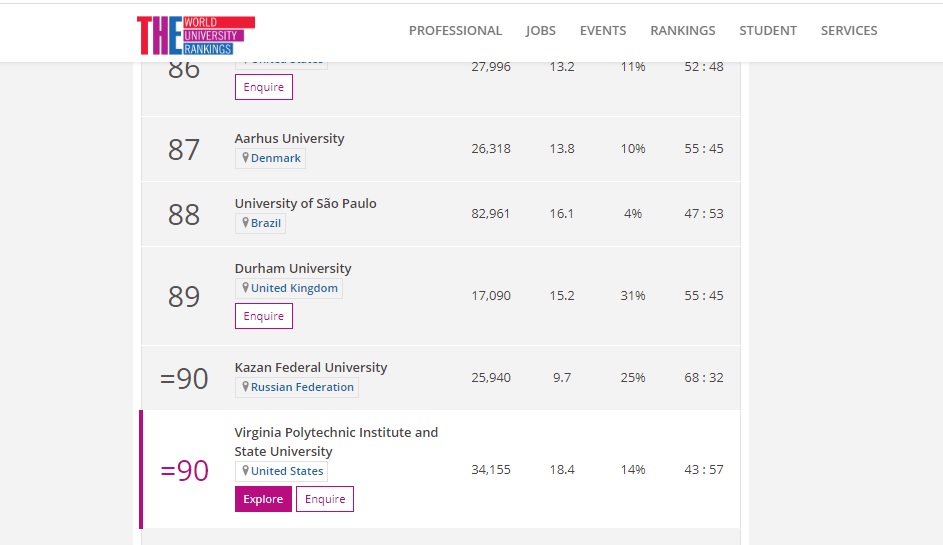 The Times Higher Education World University Rankings were published on Tuesday. In the subject area “Education”, KFU is the only Russian university out of six represented in the rating, included in the top 100. Kazan University, which made its debut in this ranking four years ago, has since strengthened its position – this time the Tatarstan university is on the 90th line. Joint international research in the field of education allowed the university not only to maintain its position, but also to grow in the international ranking.

he director of the Institute of Psychology and Education, Professor Aydar Kalimullin, believes that the Kazan Federal University represents a unique Russian experience in teacher training at multidisciplinary universities that effectively solve not only educational, but also research tasks that are so urgent for a dynamically changing world. This is the great merit of the KFU rector, academician Ilshat Gafurov, who initially defined pedagogical education as the most important social mission of the university.

– The participation of KFU in the 5-100 project brings results. Over the years, we have made sure that it is impossible to stand still, otherwise the university will not become useful for the country’s education system. Therefore, each year of participation in the project has become a time of high-quality fruitful work for scientists. And with its achievement, KFU demonstrates progress in the development of pedagogical education in Russia in the international arena.

For 5 years, the leadership of the university and scientists of the Institute of Psychology and Education unanimously and purposefully worked on this result.

– In fact, KFU is the only Russian university that consistently and on a large-scale represents Russian pedagogical education to the world scientific community. This became possible thanks to the participation of our scientists at leading international conferences (WERA, AERA, ECER, BERA, ISATT, etc.), as well as the entry of KFU into the number of members of the associations.

The University has been working to attract leading scientists for several years.

Today, the Institute of Psychology and Education of the Kazan Federal University operates 14 international research groups with leading scientists from the UK, USA, Germany, Japan, etc.

– Jointly conducted research is tied to the similarity of the problems of teacher training systems in different countries of the world and helps to develop multinational teacher training standards, which will reflect the most relevant and most important requirements for the professional qualities of a teacher.

In a joint process, researchers from leading universities in the world are looking for answers to the questions of what education should be in a global context, what are the strategies for transforming pedagogy, the future of inclusive education, educational and digital technologies in pedagogical education.

During the period of the 5-100 project, significant changes took place in the IPO.

The results of a number of studies published in reputable international publications have significantly influenced the positive dynamics when assessing the subject ranking. And this allows us to say that stable scientific directions are being formed at KFU, which are relevant at the international level.

The status of a modern Russian leader in international cooperation in the field of teacher training was consolidated by the International Forum on Teacher Education held at Kazan University, where the best achievements in this area are presented annually since 2015.

For 10 days of work, according to Microsoft statistics, more than 32 thousand participants visited its virtual sites. The Forum has become a real scientific bridge uniting Russian and foreign researchers.

The results of the research of Kazan scientists are transmitted to the international scientific and educational space also through their own scientific journal “Education and Self-Development”, indexed in the abstract database Scopus.

The director of the IPO KFU also notes the growth of international integration in the educational sphere.

– The average share of international students in 2020 was more than 10%, while in the 2016 ranking it was 2%. Even in the context of a pandemic, we manage to maintain the indicators of international integration: we offer online education to students from abroad.

KFU continues to work on the integration of young researchers into Russian educational science. To move in this direction, the university needs the competencies, experience and passion of young researchers – graduates of the world’s leading universities. The young scientists of the IPO have more than once become the authors of scientific articles published in the Q1 journal, demonstrating a high level of research activity, which has been highly appreciated in the international educational community. And this says that our university has a future.

Among the factors that help KFU to enter the top hundred of the best universities in the world, the director of the IPO KFU and the unique infrastructure for teacher training formed at the university were noted.

– Over the years, the project has created its own system of teacher training. This is one of the most comprehensive teacher training systems in the international dimension, which includes several variable models of teacher education (we are the only ones in the country that train teachers at all levels – undergraduate, graduate, postgraduate and accompanying teachers throughout their professional career), modern infrastructure training (e-learning, model school classes, own general education lyceums, a kindergarten for children with ASD that will open in the near future, digital laboratories, a planetarium, etc.

We consider all our educational institutions of preschool, primary and secondary education, on the one hand, as high-quality bases for the practical training of students, and on the other hand, as a platform for various studies in the field of educational technologies, psychology of children and their socialization, as well as for introducing our own developments in educational practice. This strengthens the research orientation of teacher education at KFU, which is underrepresented in traditional pedagogical universities.

It was during the period of the 5-100 project that KFU became one of the most visible participants in another state program – the Program for the Modernization of Pedagogical Education in Russia (2014-2017).

– International experience, close cooperation with foreign scientists have become a serious help in finding effective answers to pressing problems of teacher training, which we immediately tried to implement in our practice. We have strengthened our experimental work, which has allowed us to increase the funding of our scientists’ research. Compared to 2015, funding was increased threefold.

The development of scientific research carried out at the Kazan Federal University also allows close cooperation with RAO. The specialized research center created at the university in 2016 allows consolidating resources and thematically combining research.

All the actions carried out at KFU have become significant instruments of international promotion and allowed the university not only to become one of the top hundred universities in the field of education, but also to make a real contribution to the modernization of teacher training – an area that is now problematic for the whole world.